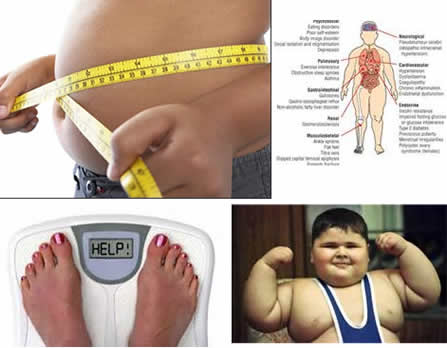 Obesity is described as ‘Medoroga’ in Ayurved. It is said that it is comparatively easy to help an underweight person, rather than an overweight person. The overweight problem can be due to an actual increase in the fat component (Meda Dhatu), or it can be due to malfunctioning. These, accordingly, will need different approaches. In very few cases it can be an offshoot of other metabolic disorders.

Body is made of 7- Dhatus {Rasa Rakta Maans Meda Asthi \), Majja) Shukra But in obese fellow Meda is excessively nourished and remaining other Dhatus get malnourished. Kapha gets accumulated in between. When Kapha increases in abnormal fashion, Fat metabolism gets hampered and person become obese.

Roll of medicines with dietary correction is to remove obstructed Kapha and let all Dhatus nourish equally. It is not only the quantity of food that is important, but also the type of food one eats. It is not always necessary to go on a restricted diet, but qualitative changes and food habits can bring remarkable changes.